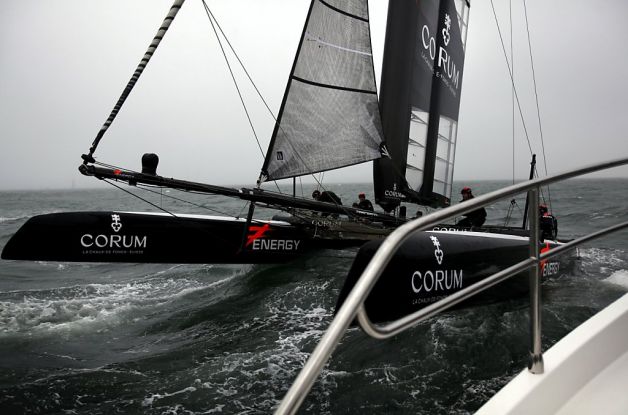 The following article appeared in the October 10th edition of the San Francisco Chronicle.

Local sailor Todd Tholke is either a Good Samaritan or a high-seas pirate.

On Sept. 30, Tholke was a hero when he went out on the bay in the middle of the night to single-handedly rescue the runaway French catamaran Energy. The America’s Cup World Series boat snapped its mooring line at Piers 30-32 that night and drifted off into the darkness, unmanned and out of control. It fetched up on the rocks of Treasure Island, where it was spotted from the land by Tholke.

At 3:30 a.m., Tholke pulled it off the shore with his 14-foot Boston Whaler. He then towed it to the Treasure Isle Marina and handed it back to the racing team.

The French were so grateful they offered to give Tholke a ride on the bay.

But Friday, as the French prepared for the regatta, Tholke’s representatives presented them with a warrant from U.S. District Court to “arrest” the boat and take it into custody as soon as Sunday’s races were over.

Based on a law from the 1800s, Tholke’s attorney John Edgcomb said in court documents, the rescue had established “a valid maritime salvage claim” and Tholke was entitled to “a liberal maritime salvage award.” Edgcomb said the amount was up to the court, but something “in excess of $200,000.”